On New Year’s Eve 1997, Olivia Hope and Ben Smart were celebrating the new year at a party in Marlborough Sounds, New Zealand. When the bunk on their rental yacht was taken over by other party-goers, they accepted an offer to sleep aboard a neighboring boat. They climbed aboard that stranger’s boat between 4 and 5 a.m. on New Year’s Day – and were never seen again. Police are confident they got the man responsible for Ben and Olivia’s disappearance and likely murder, but even two decades later, the mystery around this case remains. Scott Watson vs. the composite drawing of the “mystery man”

An artist’s rendering of the mystery ketch 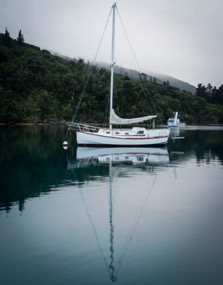 Join our Fan Club to listen to this episode and more!

**Please note** All Fan Club episode sources are listed directly on their episode show notes in the Fan Club app.